Toxic Love: Knowing When to Say No To an Alcoholic Relationship 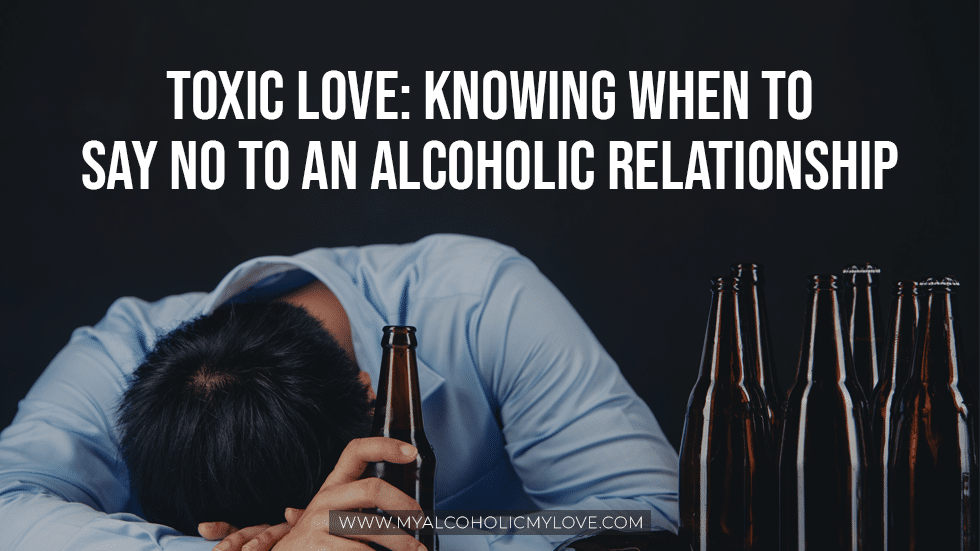 Margaret Moschak’s experiences written in her book, My Alcoholic, My Love: My Love and Loss of an Alcoholic Husband, is a powerful example of how people can say no and break from a toxic relationship involving alcoholism. Living with an alcoholic spouse is no walk in the park for any marriage. One bout of uncontrollable alcoholic drinking can spell long trouble for any relationship. It takes courage for the author to relive her experience of being married to an alcoholic husband, her struggles, and how she survived the relationship by making a choice that changed her life forever.

Alcoholism and Its Drawbacks

Alcoholism is, simply put, an uncontrollable addiction to alcoholic beverages. It is also sometimes called alcohol use disorder, alcohol abuse, or alcohol dependence. One look of a sparkling bubbly can literally send an alcoholic running towards the next available drinking bar. Of course, consuming alcoholic drinks is not necessarily a bad thing. In fact, it is a go-to practice if a person feels the need to relax and let loose a little bit from the strain and pressure of a hard day’s work. However, the act of drinking alcohol becomes something terrible if the consumption level is too much than what the body can normally tolerate. It becomes abusive and destructive if the consumption becomes unstoppable. Being alcohol dependent not only affects the drinker; people surrounding or who are closely related to the drinker are also vulnerable to effects to the drinker brought about by too much alcohol consumption. So, what are these drawbacks?

One of the negative impacts of alcohol dependency on its drinker is its effect on the drinker’s body. A person’s body can only take in a certain amount or percentage of alcohol consumption. The blood alcohol content (BAC) of a person decides how much alcohol can cause a certain on a person’s nervous system. If a person’s consumption is within their normal BAC, the effect of the alcohol on the nervous system is usually temporary or tolerable. If the consumption is more than what’s allowed by their BAC, that’s when it becomes dangerous and even life-threatening for the drinker, not only for the drinker’s nerves but including the lungs, heart, liver, and kidneys as well.

Another negative impact of alcohol dependency is its effect on mental health. Alcohol is known to be a depressant agent. Depressant agents or substances are known to reduce stimulation and arousal, or the state of being alert. These substances are also known to reduce a person’s capacity to focus, concentrate, coordinate, and react. Depressants are not entirely too dangerous or immediately lead to mental depression when taken in standard and regulated doses. When they are taken in abusive, heavy doses, it becomes dangerous, making the user or the drinker go through an uncontrolled rollercoaster of emotions such as aggressiveness, anxiety, and, yes, depression.

To the Partners and Loved Ones

Who would have thought that alcoholism also affects the people surrounding the drinker? If the alcoholic is married, spouses are most significantly impacted by their alcoholic partner. Many studies have shown that partners in a relationship with an alcoholic affect their emotional, mental, and even sometimes physical well-being. Their partner’s alcoholism puts a strain and tension on their relationship, often making them lose sleep, develop anxiety attacks, neglect their self-care, and even affect their work-life balance. Physical and verbal or emotional abuses are commonly reported when someone is living with an alcoholic. Things said or done that generally wouldn’t happen if the partner is in a sober state takes place, leading to arguments and blown-up fights. Another harmful impact alcoholism causes on a relationship is the state of living in fear that partners have to go through when anticipating the drunken behavior problems of their partners. Partners dread the time their alcoholic husbands or wives walk through the door, not knowing what problems to anticipate each time they come home in a drunken state.

When is it Time to Say No and Go?

There are a lot of support and resources out there available and often free to help loved ones or partners living in a toxic relationship with an alcoholic partner. With all the support and therapies but still seeing no changes with their alcoholic partner, it becomes a question of when to go, say no, and say enough is enough. A person can only take so much out of a toxic relationship before losing a part of themselves. At the end of the day, it all boils down to whether a person’s sanity and integrity are still intact, whether it is still healthy to remain in that relationship, and whether the relationship is still worth saving at all.